Music:  The Alternate Routes – Nothing More 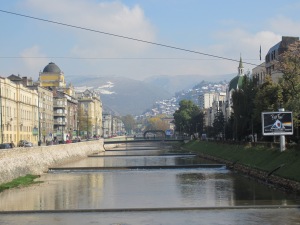 I didn’t know much about the longest siege in modern warfare, the Siege of Sarajevo, as the dilapidated train slowly made its way toward the Bosnian capital.  I couldn’t tell you anything about the war, or the miles of woods that still held active landmines.  I really had no idea what to expect, except that I had heard Sarajevo was beautiful, off the beaten path, and worth traveling along the 10-plus hours of bone-jarring track that once united the former Yugoslavia.  They say that ignorance is bliss, but in this case, it was the learning experience I had in Bosnia and what I found out about the battle-scarred country that has put it at the top of my list of my favorite countries in the world. 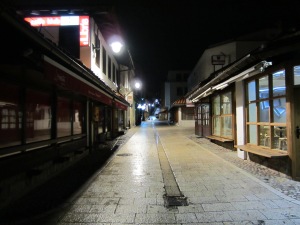 My snapshot into Bosnian history began on the long train ride there.  I could not leave Belgrade, Serbia fast enough, and that wasn’t helped by the ticket seller who neglected to tell me the clocks changed the night before my train departed.  I prefer to show up early for trains and flights anyways — a trait inherited from my always-punctual father — and I initially thought the empty train was a lingering sign of Serbian-Bosnian hostility;  the much simpler answer was I was over an hour early for its departure.  So I waited, and had a compartment all to myself, and I tried to catch up on the sleep I lost by arriving so early.  The rigid seats and stuffy compartments of the pre-war trains didn’t help, and I quickly gave up on any attempts to nap.  After the train started rolling towards the border, I was joined by a Belgian college student who was making his way south to party in Sarajevo.  He had just finished reading a book on the city’s tumultuous history, and he regaled me with war stories and historic facts.  My curiosity was piqued as the train filled up with Bosnians heading back to the capital for the weekend. 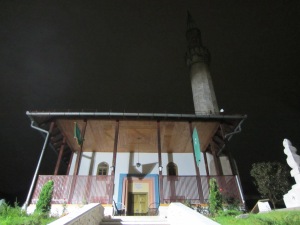 Stepping off the train and finding an ATM for some local currency was easy; finding a taxi driver who knew where my hostel was seemed to be more difficult.  Besides the obvious language barriers, he didn’t know exactly where the road my hostel was on was located, and after driving around for a half hour in circles, I told him the “Old Quarter” was close enough.  The Old Quarter in Sarajevo is a collection of businesses, restaurants, and hotels situated along a few stone walking streets.  I thought finding my hostel in the ancient maze would be easy, disregarding the pouring rain and rapidly approaching nightfall.  The taxi driver pointed me in the right direction and was visibly upset that I didn’t yet have any small bills since I had just gone to the ATM minutes before.  I patiently waited in the passenger seat while he ran into a bar with my large bill, took out a tip for himself, and gave me back an incorrect amount of change.  After spending some time in Serbia and Bulgaria, I have to admit his callousness barely phased me. 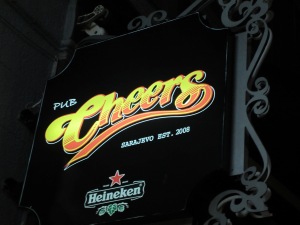 When I eventually stumbled upon my chosen hostel, Residence Rooms, I was delighted at the rooms, the location, and the owners.  The husband and wife team that ran the hostel had lived there through the Siege of Sarajevo, and the husband ran a war tour that was my primary purpose in staying there.  After getting me settled into my room and signing me up for the following day’s tour, I set out to fix the rumbling in my stomach.  Cheers, a Boston landmark somehow transferred to Sarajevo, was directly across the street and had beer and pizza.  Being in a perpetual beer-and-pizza mood, I obliged.  I would later dreadfully regret that decision, but at the time, it more than sufficed.  It was still early when I was finished eating, so I went in search of a good bar to grab a drink or two or three or four.  The aptly-named “Guinness Bar” located in the Old Quarter sounded like the perfect spot for a night cap, until I was told they were out of Guinness.  Still the bartender recommended another stout, and I was happy.

While there a crowd formed at a nearby table with three Middle Eastern friends.  The bartender was hanging out with them, and they all invited me to join them for a beer.  Traveling solo, I’m always up to meet new people, and I introduced myself to the group.  I was surprised to learn they were from Kuwait, they all spoke perfect English, and one was part of a Kuwaiti royal family. They all appeared to be relishing the time away from the strict laws of their society.  If there is one country that likes America, it’s Kuwait, and they instantly treated me as a friend and neighbor.  We drank beers until closing, and then they invited me to check out their stellar pad on the outskirts of the Old Quarter.  With the promise of an amazing view, top-shelf vodka, and a stop at the corner kebab stand, I couldn’t resist. 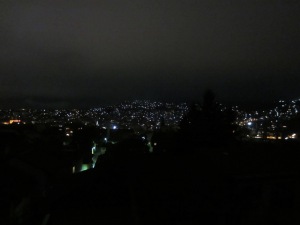 View from the Kuwaiti’s balcony. Camera doesn’t do it justice.

I was greeted with a quick tour and proudly shown their collection of liquor, a commodity that is regulated and overpriced in their home of Kuwait.  The four of us then shared a drink in the living room, where I mostly prodded them about life in Kuwait and the differences in our cultures.  I have always been fascinated by different cultures and religions, and as conversations usually do when alcohol is introduced, the focus began to shift towards sensitive subjects, such as their Islamic faith.  It might have been the liquor I consumed or whatever they loaded into their hookah, but what they were telling me about the Quran and Islam started making sense.  I could understand why they believed what they did, and how their intensely religious cultures can be beneficial, in the right context; however, I still have a problem with their suppression of women and the whole jihad thing, and I think they could sense that.  My welcome was wearing thin, so I excused myself and awkwardly gave them all a peck on the cheek, how men greet and say goodbye to each other in their culture (or at least I was told…).   Two months into my travels, my directional instincts were honed, and I made it back to the comfort of my room after a beautiful and quiet walk through the heart of the city. 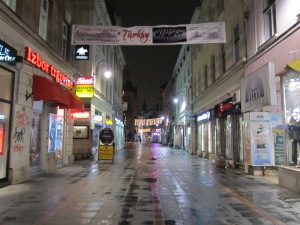 Old Quarter at four in the morning

I was awoken early by the rumbling in my stomach that returned with a vengeance.  It was not hunger pains, however, and I spent a majority of the early morning in the shared hostel bathroom.  Finally, Pepto Bismol and Immodium fighting for digestive dominance, I was able to fall back asleep — before I was woken up early by the elderly owner pounding on my door.  “Mr. Adam, you sign up for war tour.  We leave soon.”  A million possible excuses ran through my head, but I knew he only gave the tour when he had enough people sign up.  I might not get another chance, so I dragged my aching body out of bed and into the front seat of his small car.  We were joined by two Australian girls in the back, and off we went as snow started to lightly fall around us. 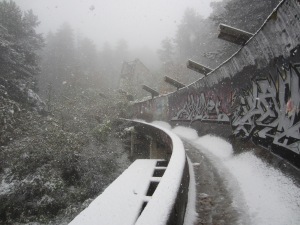 Remains of the Olympic bobsled track

Our first order of business was to gingerly climb the mountains surrounding the city to reach the once glorious Olympic park.  A little known fact, especially to my friends who were born post-1985, was that Sarajevo hosted the wildly successful 1984 Winter Olympics.  The tour would later pass by the remains of the stadium built for the occasion, but for now, the old bobsled run was an important stop.  He invited us to step out, climb on the track, and take pictures, weather-permitting.  I carefully climbed up to the track while the girls walked around below.  Then he started into the story. 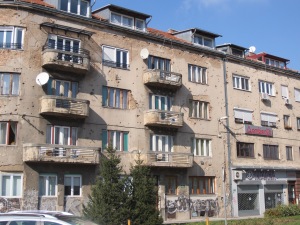 When the siege first began in 1992, the Serbs blockaded the city and took up key positions in the mountains surrounding Sarajevo.  The bobsled track just happened to be located in a perfect overwatch position, and our guide related how the Serbs would hide in the foliage and rocks and rain accurate sniper fire down upon the citizens of Sarajevo.  He told us how one day they awoke to what appeared to be a giant flaming snake on the mountainside, a form of psychological warfare for the besieged Bosnians.  The Serbs, who had been using the surrounding area as a fighting position, covered a large section of the track in gasoline and spark it, lighting up the night sky and burning for days.  What remains is a skeleton track, strewn with graffiti, a memorial to Sarajevo’s pre-siege cultural aspirations. 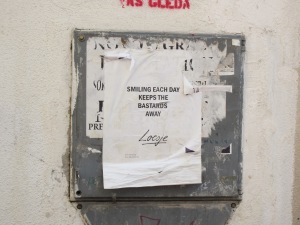 The next stop was the tunnel museum.  Along the way, our guide told us stories of how he was personally responsible for loading up buses with carefully picked political powerhouses or other VIPs who got to escape the siege.  He was heavily invested in trying to help his fellow Bosnians, and when given the choice to flee in one of his convoys, he voluntarily stayed behind to continue performing his duties.  The tunnel he showed us ran under the airfield, and it played a pivotal role in moving supplies in and the wounded out.  UN Peacekeepers controlled the airfield, but they couldn’t offer much more in the way of assistance to the battered population.  This cramped tunnel was the Bosnian’s major lifeline, and a small piece of it is still open to the public. 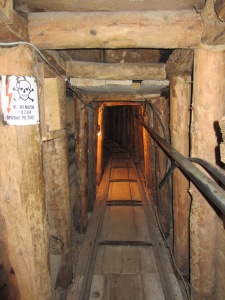 The siege officially ended in 1996 with the help of US intervention, and so did my tour with nature’s intervention.  The snow was still coming down when I got back to the room in time to watch the New England Patriots play in London.  It was an amazingly depressing day, but I also learned so much about a country history forgot.  It is strangely sobering to see the bullet and rocket holes of a recent conflict, knowing that I was sleeping peacefully in my bed halfway around the world, ignorant to the entire situation.  All of my childhood problems were reframed in the knowledge of what children, many the same age as myself, were going through on the streets of Sarajevo.  Snipers knowingly targeted children, and mortar rounds happened to land on non-military swing sets and playgrounds far too often.  I was only in Sarajevo for three nights, but in that brief time, so many different people had opened up to me and let me step out of my life and into theirs.  It was a humbling, rejuvenating experience, and one I will not soon forget.