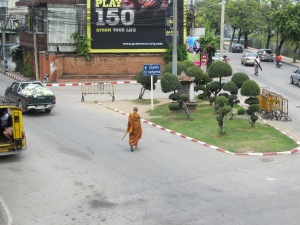 Arriving in the northern Thailand city of Chiang Mai was a solemn occasion for me.  I was leaving behind the beauty and the friends I had made in the southern Thai islands for what could best be described as the chaotic and hectic atmosphere of a big city.   I was definitely unsure of what to expect as I hesitantly left the airport and boarded a taxi to my hotel. Things did not start off as planned as the taxi driver was of the popular Thai “less-than-motivated” division, and he didn’t want to help me find my hotel.  I argued with him a bit, telling him I paid for a ride to my hotel and he wasn’t going to drop me off in the center of town.   This seemed to give him the extra push he needed, and he was quickly asking other tuk tuk drivers for directions.   My hotel, Tadkham Village, was nicely situated right near the popular Sunday Night Market that I had heard many good things about.  I dropped off my bags and immediately headed for the section of bright lights and pungent aromas.

When I turned the corner and entered the night market, I was instantly cleansed of every negative thought that had been bothering me.  The atmosphere seeped through my pores to once again remind me why I love to travel, and the sights and sounds were intoxicating.  It’s hard to explain to someone who doesn’t enjoy traveling or being outside their comfort zone, but it was like going back in time.  Suddenly, I was a kid again, experiencing everything for the first time.  My smile was a permanent fixture of my face, and it was happily returned from many of the street vendors.  I paid less than a dollar for a fresh coconut, hacked to pieces by an elderly woman and given to me fresh so I could savor its sweet, delicious nectar.  I was in my element again.  Any doubts I had of why I had come to Asia vanished as I wandered the mile-or-so of shops that lined this weekly affair.   Making a loop at the end and heading back towards my hotel, I joined the group gathered around the mini-motorbike-driving dog that held everyone’s attention.  I couldn’t help but laugh.

Waking up the next morning and venturing out into Chiang Mai, you get the feeling that it’s not that big of a city at all — of course, it is, but it somehow doesn’t feel that way.  I found a quiet coffee shop not far from my hotel, and after ordering the classic Americano, an English-speaking gentleman asked me where I’m from and recommended a blend that he thought I would enjoy.  It was the most delicious coffee I’ve had yet in southeast Asia, so much so that I went back there every morning I stayed in Chiang Mai.

Chiang Mai is an ancient city, but apart from its decrepit walls and moat, there isn’t too much to see.  My first day was spent just wandering until I found a one-of-a-kind silver-made temple that is quite unusual for Asia.  I found myself alone in exploring it, and I spent some time there just trying to clear my thoughts.  It could have been that I was on vacation and had very few worries, but I found the serenity the wat provided very alluring — so much so that I went back later that night to speak with a monk and partake in a three-hour mediation lesson.

Finally my stomach couldn’t take it anymore, and it was time to search out some good eats.  Chiang Mai has a large street-food culture, and I loved trying different street stalls for $1 or $2 a dish.  I had planned to watch some Muy Thai boxing that night, so I walked in the direction of the stadium so I knew I wouldn’t be late.  On my way I passed what — during the day — was a motorbike repair shop.  When the sun dropped below the horizon and food-lovers emerged in droves, they compensated by creating a restaurant in the driveway.  This place was packed, so much so that I was actually intimidated to sit down among what had to be an elite group of foodies.  I initially walked passed, and then, thinking about what I could be missing, turned around and found one of only a few empty small, plastic seats centered around those metal tables you use for fundraisers in a town softball league.  The menu was small, yet efficient, and I pointed to something that looked delicious.  The ‘waitress,’ or mechanic turned bus-girl, actually spoke fairly good English, and she helped me pick out what I wanted and how spicy I wanted it.  Ten minutes later and I was in taste-bud heaven.

Finally it was time for the main event.  For the paltry sum of $8, I was granted admittance to five scheduled Muy Thai fights.  I was seated next to some American girls who were volunteering with elephants, and they were good company throughout the night.  They shielded their eyes as I enjoyed the violence.  They winced at the knockouts as I cheered, and they shook their head in disgust at my favorite part of the night, the four-man blindfolded fight. 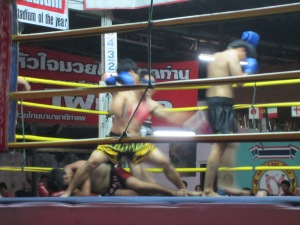 Four amateurs, four blindfolds, and a whole lot of laughs

I left completely satisfied with my meal, my Thai boxing experience, and my decision to once again take the risk of leaving home to explore the amazing beauty of southeast Asia.

“To my mind, the greatest reward and luxury of travel is to be able to experience everyday things as if for the first time, to be in a position in which almost nothing is so familiar it is taken for granted.” – Bill Bryson